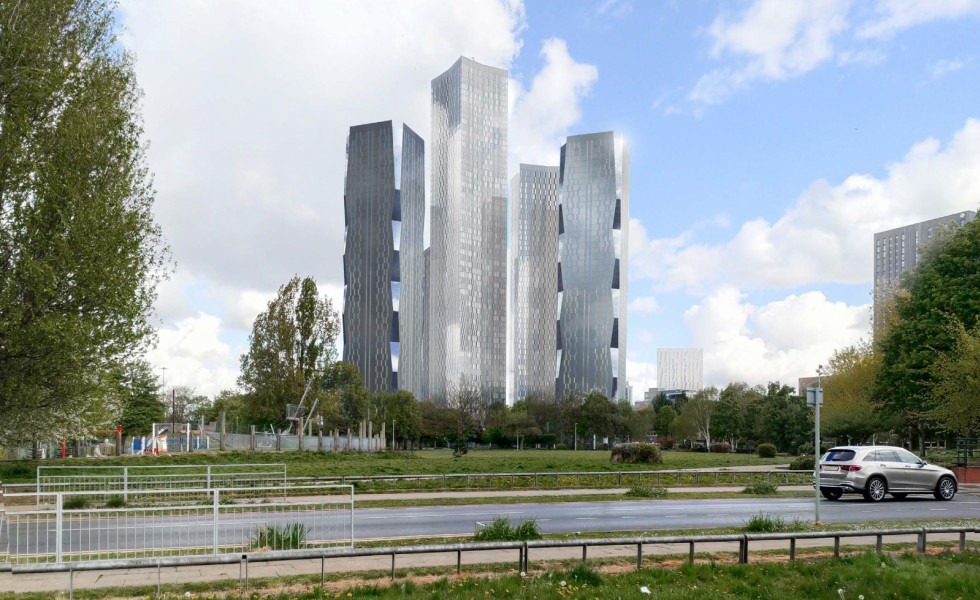 The towers are planned for the site of a car park and industrial land by Great Jackson Street and are the next phase of a development framework which will eventually see more than 10 new towers added to the area.

Under the plans, which are currently out for consultation but are expected to be submitted later this summer, the towers would provide 988 new homes as well as residential facilities and 2,000m2 of public realm.

A typical floor plan published by developer Renaker shows 10 one or two-bedroom flats per storey, with six single-aspect flats and four dual-aspect corner flats. However, the developer has said the tower will also contain some three-storey flats.

The plot had been due to have three towers between 33 and 46 storeys under the 2018 development framework, but Renaker said the switch to two taller towers allowed more daylight to reach the existing Deansgate Square towers, also designed by SimpsonHaugh.

In a consultation document for the scheme, Renaker also said the designs for the towers had 'sought to provide them with their own identity' and add 'excitement to the skyline', while also reflecting the existing design context.

'The external appearance of the buildings provide an elegant and slender form, with chamfered corners to provide further architectural interest to the buildings,' it said.

'The detailed façade design is still under review, although there is an intention for subtle variation of colour to be introduced into each building to further strengthen their identity in the cluster.'

As well as Deansgate Square, the towers will also be near Blade and Cylinder, two more 52-storey towers designed by SimpsonHaugh for Renaker, which were approved by Manchester City Council last summer.