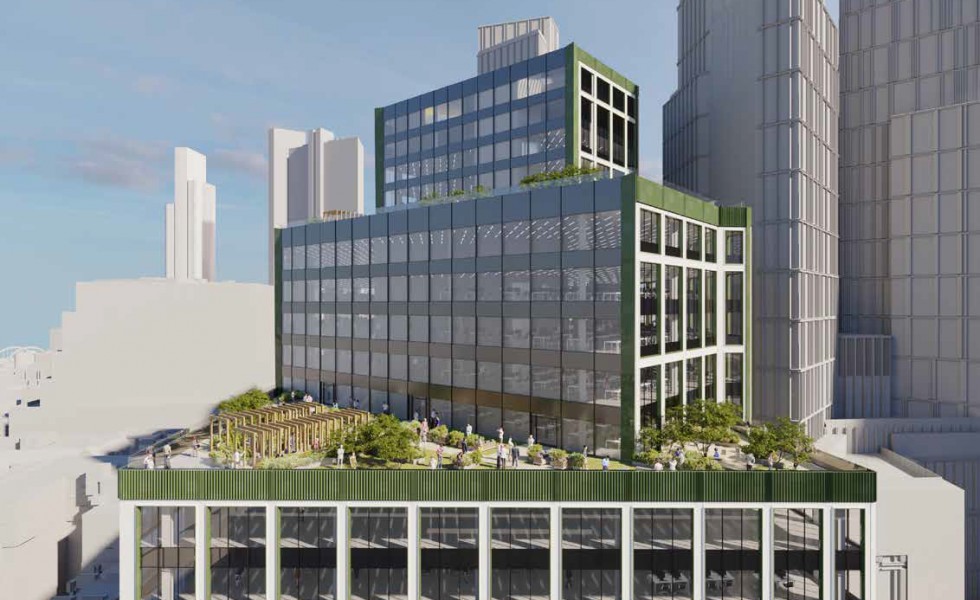 The 4 to 21-storey building has been proposed by the London Stock Exchange Group, but the company has said it is planning to sell the site on.

The scheme involves the demolition of a group of office buildings of five to six storeys, including Technico House, an office block from the 1960s with a Richard Seifert entrance canopy; and a London Stock Exchange building dating from 1986.

The new building will have 65,766m2 of office floorspace as well as 510m2 of retail and café use on the ground floor. It will replace 25,622m2 of office and other floorspace.

Viewing corridors and the various surrounding buildings have led to the scheme using a 'stepped massing form', with storey height increasing from 4 and 5, to 10, 15 and 21 storeys.

The scheme's highest point is a response to the existing cluster of tall buildings on Kohn Pedersen Fox's recently completed Crown Place to the south – which has buildings of up to 34 storeys.

Hackney Council's planning report acknowledged the difficulties of designing big schemes in the area, saying: 'One of the challenges faced by the architects is how to create a coherent design where the massing has been determined by St Paul's view corridors, conservation constraints, and significant variation in surrounding built scale.'

The tallest elements of the proposal will sit in the shadow of the St Paul's Cathedral viewing corridor from Embankment Pier, although Make says no part of the proposed building will be visible from this viewpoint.

The scheme was criticised by various local groups ahead of the planning decision.

The Shoreditch Conservation Area Advisory Committee had 'serious reservations about the scale and form of the proposed building and its very significant impact on the Conservation Area due to its overall scale, form and visual impact'.

While it had no problem with the height of the development, the committee said its 'overall bulk' was 'unrefined and exacerbated by the clunky geometry of the setbacks at upper level'.

Meanwhile, the Hackney Society said in its submission: 'This is a proposal that has been through the mincer – six pre-apps, two design reviews and four consultations.

'One suspects that too many people have put too many "oars" into the design development so that it has now arrived at a point where the design has lost cohesion and a sense of self.'

A spokesperson for Hackney Council said: 'The decision is subject to completion of a legal agreement to secure scheme benefits and sign-off by the Greater London Authority. Once planning permission is granted the developer will need approval for final details of the scheme.'