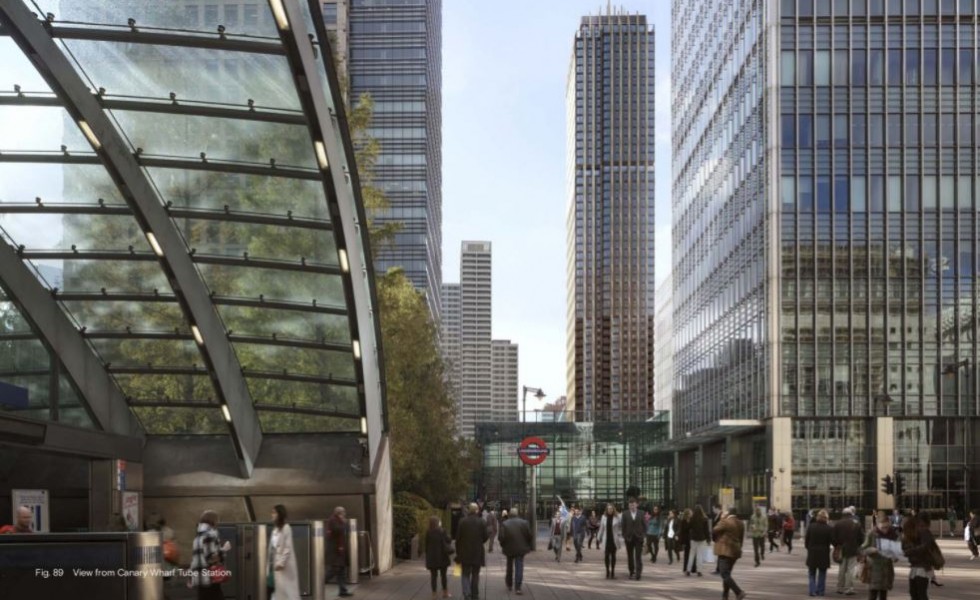 Plans have been submitted to Tower Hamlets to demolish the existing six-storey 1980s office Ensign House on the South Quay waterside plot to make way for the 495-home tower.

The bronze-clad building will feature a crown decorated with a thin spire which will light up at night and 'celebrate the siting of the building' in views from across London.

With a height of 230m including its spire, the tower will join the cluster of tall buildings to the north at the Canary Wharf Estate, behind César Pelli's One Canada Square (235m) and Squire & Partners' Pinnacle (234m).

It will provide homes for private sale as well as 125 affordable homes and will include 296m2 of shops at ground floor level and a pocket park to create 'breathing space'.

The tower will have private homes on the higher levels, while the affordable housing would be located on levels 6-20 and will be 'tenure blind' with no visual differentiation between the two parts.

The scheme also includes a double-height play terrace for all residents at level 5, which will be covered but open to the air.

According to documents sent to Tower Hamlets, planning officers challenged the architect to design a building that was 'distinctive' on the skyline, leading Maccreanor Lavington to explore ideas for the crown and spire.

The tower is among a new wave of high-rise housing developments in the South Quay area, including Glenn Howells Architects' two-tower Wardian project for Eco World-Ballymore.

The new tower will sit on the plot right next door to SimpsonHaugh's Quay House (pictured in graphic below) hotel and serviced apartments scheme approved in early 2020.

Tower Hamlets Council is considering a Section 73 planning application to amend this scheme – shortening the tower from 40 to 35 storeys and widening the building slightly.

Documents sent to the council state the amendments have been submitted due to the 'significant changes' in the market following the Covid pandemic, which has 'forced a detailed review of the approved scheme to ensure it remains deliverable'.

The project, delivered in partnership with Manchester City Council, is part of the Victoria North regeneration programme aiming to build 15,000 new homes over the next 10-15 years.

The plans for Redbank include 4,000 new homes with 20 per cent affordable housing which builds on the 'diverse landscape' of the site near the river Irk.

Kevin Logan, director of Macreanor Lavington's Urban Studio said: 'Our Wild Urbanism vision for a new community in Red Bank has been developed to positively respond to the challenges of the climate emergency, biodiversity breakdown and ensuring health and equality.'