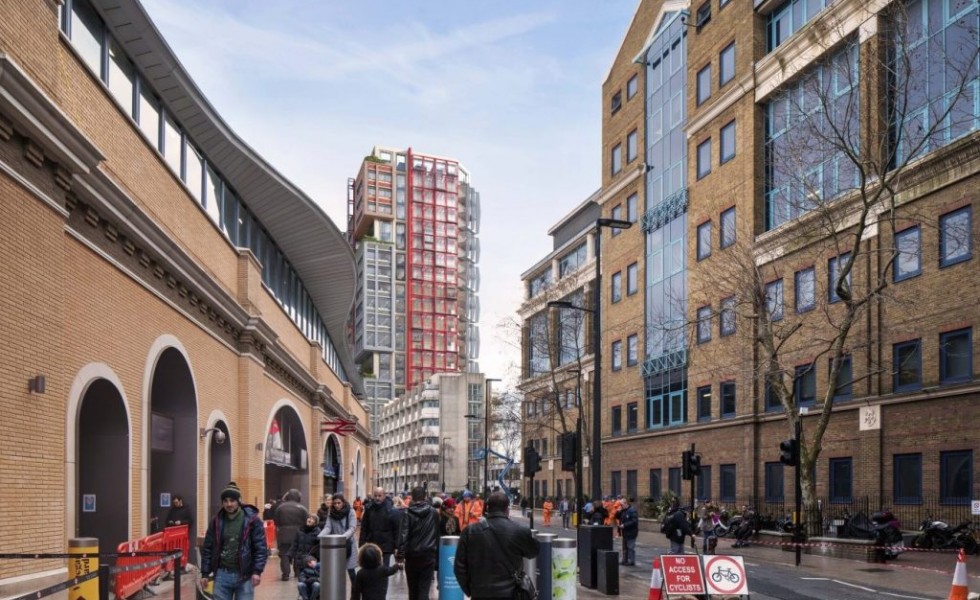 London mayor Sadiq Khan has approved plans for a 20-storey tower in Bermondsey, two years after Southwark Council rejected plans for the site.

As reported by CN sister title Architects' Journal, Southwark councillors rejected an application for an office tower in 2020, saying the 87m building would have "excessive height, scale and massing" for the 0.3ha site in St Thomas Street, down the road from The Shard. However, the planning application was called in by the Greater London Authority.

The new scheme has been amended to allow flexible medical, research and development uses, with increased floor-to-floor heights, a more rigid structure to control vibration and space for systems to support healthcare uses. The tower's height has been increased to 97m.

KPF said its revised tower had a "distinctive stepped profile, rising to 20 storeys, composed of a series of carefully assembled volumes that respond to the sensitivities of the immediate context". It added that the façades are differentiated "through subtle variations within a palette of brick, terracotta, stone and glazing", and are "inspired by traditional warehouse architecture".

The tower will have active frontages, with shop space, as well as an urban garden at its base. An existing warehouse at 9 Fenning Street will also be retained, and converted into retail and community space.

A letter from Southwark Council to the GLA last month pointed out that there would now be a "much taller building than previously proposed", adding that "this increased height causes harm to the important view from the Bermondsey Street conservation area", which "could have been avoided by a lower building".

However, the mayor of London approved the scheme following a public hearing last week.

KPF said the tower would achieve a 27 per cent embodied-carbon reduction compared with the GLA benchmark, with the project targeting embodied carbon below 800kg CO2e per square metre. It added that the façades would have fixed, solid spandrels with window infills for a longer life and easier repair than a curtain-wall system.

KPF design principal John Bushell said: "It has been a long journey, but hugely rewarding, to deliver a design that places this building at the heart of London's new central life sciences and innovation district.

"Life sciences are an increasingly important element in the UK property sector and our experience around the world tells us that life sciences innovation blossoms within a thriving mixed-use neighbourhood. That is central to our approach at Vinegar Yard and we are looking forward to seeing it take shape.

"Connecting the benefits of the development with Southwark's diverse community is just as vital to the success of our building and the SC1 District. We have listened and directly responded to local aspirations so that the scheme delivers lasting improvements to the borough."

CIT director Ewen Puffett said: "We welcome the decision by the mayor of London to approve the application for Vinegar Yard – a truly transformative development that will unlock this site's potential as a place for health and creativity.

"It will drive improvements to health and wealth across the area, creating jobs and contributing to London's post-COVID recovery."