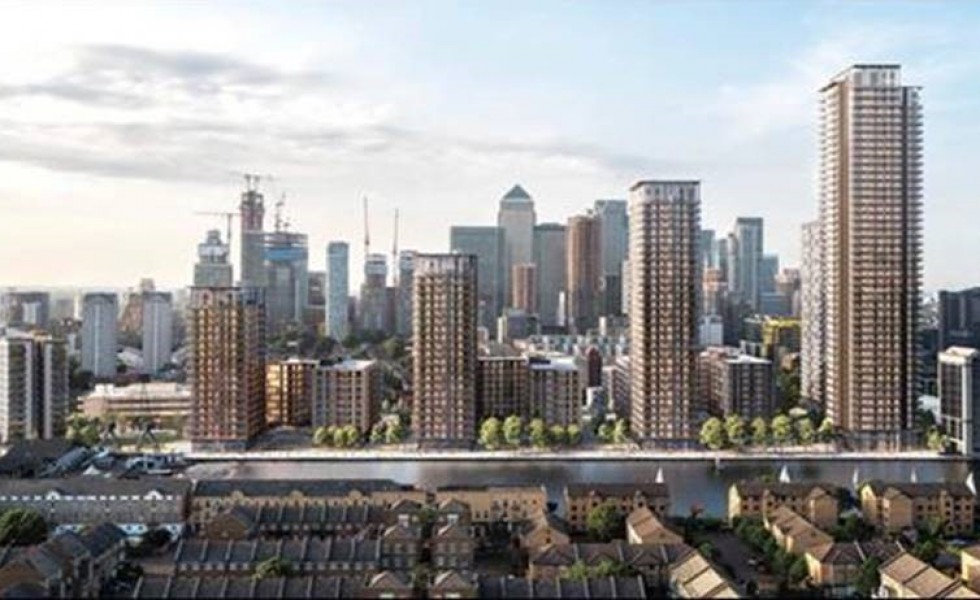 Housing secretary Robert Jenrick has used his ministerial powers to approve the 1,540-home Westferry Printworks scheme in Tower Hamlets against the advice of a planning inspector.

Client Westferry Developments already had consent for a 722-home version of the scheme, to be delivered in four towers of up to 30 storeys on the 5ha Isle of Dogs site after then-mayor Boris Johnson used his powers to approve the scheme in 2016. But new plans for the site, owned by former Daily Express and Daily Star proprietor Richard Desmond, were submitted in 2018 adding an extra tower and seeking to deliver 1,540 new homes as well as 1,730sq m of restaurants and bars and 1,048sq m of flexible commercial space.
The scheme, designed by architect PLP, was toned down to deliver 1,524 new homes in towers of 19 to 44 storeys and Westferry appealed against Tower Hamlets council for its failure to determine the application within government-prescribed guidelines last year. Tower Hamlets subsequently indicated that it would have refused the scheme anyway ahead of a planning inquiry last year.
PLP’s Westferry Printworks scheme seen from the south-east, across Milwall Outer Dock
Ministry of Housing, Communities and Local Government papers reveal that planning inspector David Prentis recommended the scheme be refused because of its impact on nearby heritage sites; conflict with local planning policies; an unacceptable level of affordable housing – 21% when measured by room, against the 35% normally sought by the borough; and the towers’ effect on a local sailing club.
The heritage sites in question are the Old Royal Naval College at Greenwich, the Maritime Greenwich World Heritage Site and Tower Bridge.
But Jenrick has overruled the decision, arguing that even though the scheme might reasonably provide more affordable housing, there was “no evidence” that another scheme might come forward that did so – and that the supersized scheme provided 142 more affordable units and 600 more market units than the earlier scheme.
A letter written on the secretary of state’s behalf said “substantial weight” had been given to the housing benefits of the scheme and that Jenrick believed the five towers were an “attractive composition” when seen from a distance.
“While the secretary of state agrees with the inspector that design must be considered holistically and that the design of the towers is not of itself a benefit in the planning balance, this factor nonetheless reduces the degree of harm caused by the scheme,” the letter said.
“In its context and by comparison with the quantum of development already approved, taking all of the above into account, the harm to the character and appearance of the area identified above carries moderate weight in the planning balance, in the judgement of the secretary of state.”
The letter said Jenrick accepted the scheme caused harm to the heritage assets identified by Prentis, but that the minister felt the benefits of the proposals outweighed that harm.
Jenrick also accepted the scheme would have a negative impact on sailing conditions in Millwall Outer Dock, but argued that the impact would “not be materially different to that of the consented scheme” and could only be given “limited weight”.
Westferry Developments’ original proposals, consented in 2016, included the delivery of a 1,200-pupil secondary school on an adjoining 1.2ha site. The reworked proposals allowed for the school to be delivered in line with the consented scheme or the revised plans. The school was not part of the appeal.
Tower Hamlets has six weeks to challenge Jenrick’s decision at the High Court.
Elected borough mayor John Biggs said he was “extremely disappointed” with the secretary of state’s decision.
“I’d strongly objected to the revised plans due to their increased height and density as well as the lack of affordable housing,” he said.
“By ignoring the concerns expressed by the council and residents, as well as the Planning Inspectorate decision, it sets a worrying precedent for developers to get decisions approved behind closed doors ignoring local democracy.”
The project is the latest in a long line of planning inquiries the borough has faced in recent months. In February last year it admitted that “unusually high” numbers of planning inquiries had cost it close on £1m in barely more than a year.
Councillors’ refusals for a 49-storey Make Architects tower and a 319-home 3DReid development were overturned at appeal by planning inspectors. Other schemes given the go-ahead at appeal include PLP’s Whitechapel Estate redevelopment project and an apartment hotel at Aldgate designed by Grzywinski & Pons Architects.

One converse situation was the Sainsbury’s Whitechapel redevelopment, drawn up by Ross Hutchinson. Jenrick’s predecessor James Brokenshire overruled a planning inspector’s advice that the 471-home scheme be approved following a planning inquiry.