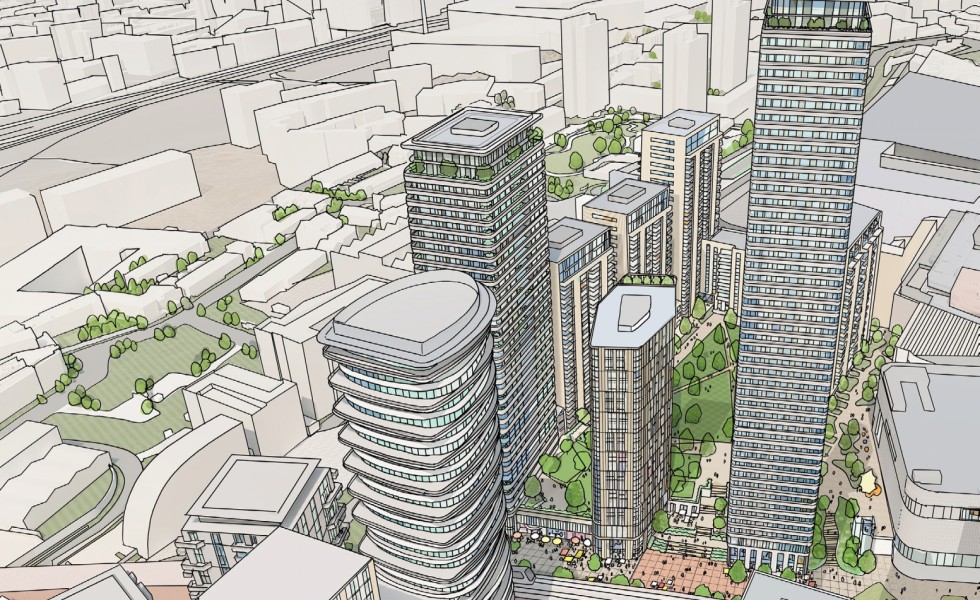 In 2017 Allies and Morrison was given outline planning permission for 1,347 homes across three sites – designated C, K and D – on behalf of developer Unibail-Rodamco-Westfield (URW), which owns the Westfield shopping centre and the surrounding land.

Under these plans, site C was set to have 1,100 homes across eight blocks ranging from eight to 23 storeys in height. The developer has already delivered 89 affordable homes on site K, while site D is earmarked for 158 homes.

Now Glenn Howells has submitted revised outline plans for site C, which would see 1,760 homes provided across nine blocks, ranging from nine to 45 storeys in height. As well as the 45-storey tower, the scheme would also feature a 34-storey tower, a 24-storey block and  two 19-storey blocks.

Keith Whitmore, URW's UK head of development and director of construction management for Europe, said: 'Since the original permission was granted, the local area has undergone significant regeneration, the surrounding development context has varied and most importantly, the needs of the local community have changed.

'The revised scheme responds to the changing context of White City creating up to 1,760 much needed new homes with outstanding architecture which seeks to maximise the quality of living for future residents.

'Importantly, the new proposals will include a substantial uplift in the amount of affordable housing proposed compared to the existing permission, demonstrating our commitment to creating and strengthening communities through the mixed-use nature of our destinations.'

Recent developments near the site include projects by Allies and Morrison and AHMM, while a nine-storey office block by Morris+Company has recently started onsite and White City Living, a 1,845 home-scheme by Patel Taylor, is also under construction.

Glenn Howells, partner at Glenn Howells Architects, said: 'This project delivers high-quality homes with outstanding outdoor amenities, including a new park, pedestrian routes and The Makery, a new area of active public realm, all of which benefits residents and the wider local community.

'The project aligns with the emerging context at White City, which is providing a new creative hub for this rapidly emerging and exciting destination in West London.'

URW said it had not yet decided whether more architects could join Glenn Howells to produce detailed designs for the site, should its outline application be given consent by Hammersmith and Fulham Council.

URW acts as developer and builder for its projects, which also include Cherry Park, a £670 million development by the Westfield shopping centre in east London. Cherry Park will feature 1,224 homes designed by PRP for private rent.