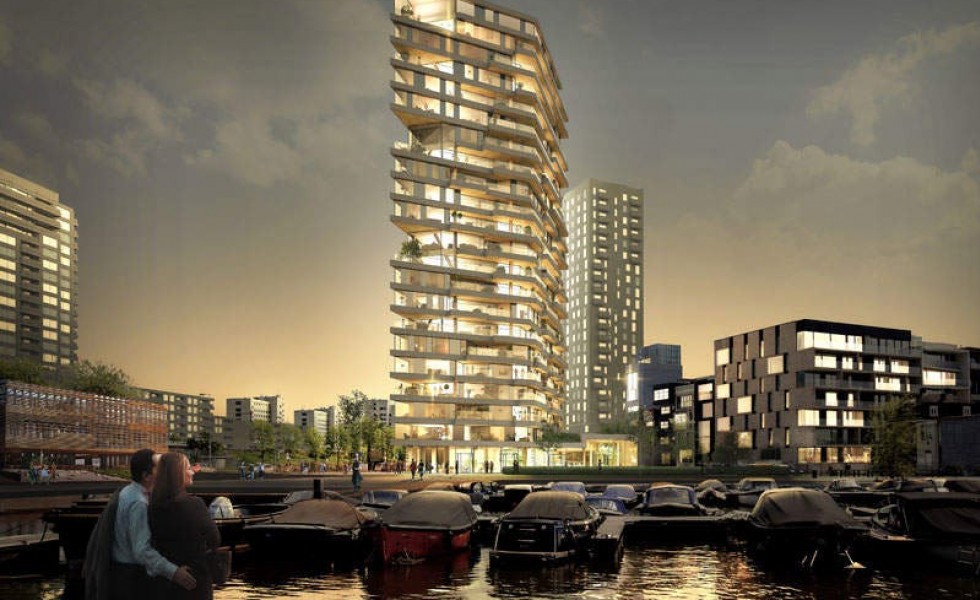 Completed this year, HAUT is part of the country's commitment to becoming climate-neutral by 2050, in which the use of timber as a building material has been identified as one of the most effective ways to accelerate decarbonization. As noted by Arup, in 2021, over 80 Dutch companies signed the Green Deal covenant Houtbouw of the Metropoolregio Amsterdam. With this, the nation's capital and most populous city is committing to the goal of building at least one in five buildings using primarily timber from 2025 onwards.

HAUT was conceived in 2016 with the aim of being of both sustainable and high architectural quality. Situated near the Amstel river, the structure is one of the tallest timber-hybrid buildings in the world, standing 21 floors tall at nearly 240 feet. It was also certified BREEAM Outstanding, both in design and in its structural engineering. In HAUT, more than 2,000 cubic meters (70,630 cubic feet) of timber were used, which brought a total reduction of carbon emissions by 50% compared to conventional buildings.

The building's façade consists largely of triple glass and integrated PV panels. Sunlight supplies the building with natural heating and optimal lighting conditions. Combined with the rooftop photovoltaics, this energy-positive exterior generates enough energy to supply the entire building with energy. Other sustainable features include an ATES system, sensor-controlled installations, and low-temperature underfloor heating. HAUT also hosts a rooftop garden with rainwater storage and nest boxes for birds and bats.

As detailed by Arup, the design principle for HAUT was "timber where possible, concrete and steel when necessary." Thus, the foundation, basement, and elevator core were built using concrete, which gives stability to the main supporting structure and contributes to the fire safety of the building. Looking to use as much timber as possible, Arup developed an innovative and affordable solution for the building's mezzanine floors. The team custom-designed a precast timber-concrete hybrid floor plate developed in collaboration with developer Lingotto, Team V Architectuur, contractor J.P. van Eesteren, and timber specialist Brüninghoff.