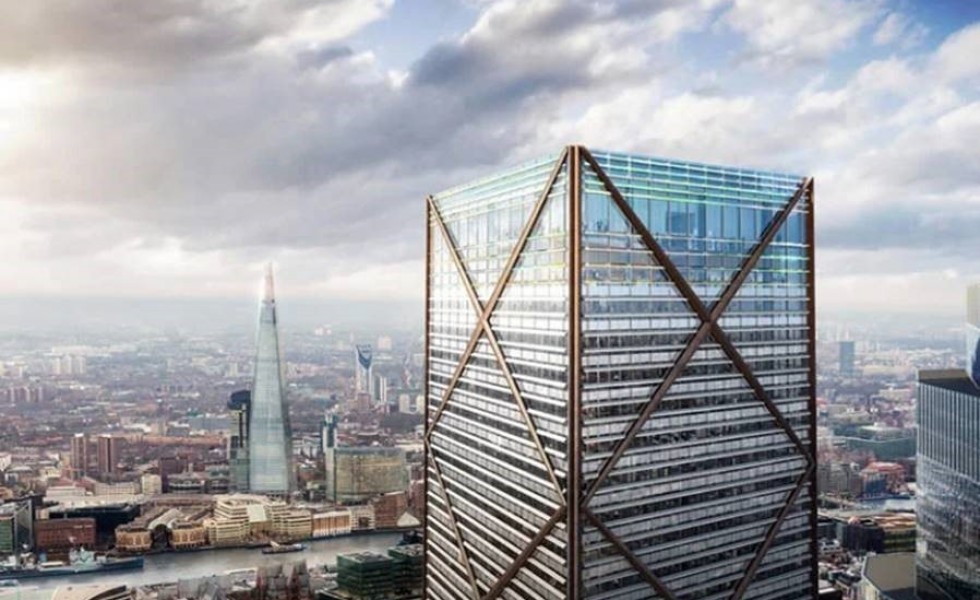 London keeps on growing upwards. But what new skyscrapers can we look forward to — or dread — in the near future?
When completed in 2003, the Gherkin was London's third-tallest building. Today it is the 17th, and barely visible from many angles.
The skyline continues to evolve, with new structures like 22 Bishopsgate, the Scalpel and a raft of new towers at Canary Wharf. But what can we expect to see in the next few years? Here we look at five planned skyscrapers that will soon by gracing/ruining views across central London.
Heights below are in metres. For comparison, the Gherkin is 180m while the Shard is 310m.
1 Undershaft (290m)
This lofty monolith should become the Square Mile's tallest building, slightly edging it over the recently completed 22 Bishopsgate (which you can just see, cowering behind 1 Undershaft in the image above). The office scheme, designed by Eric Parry, will first require demolition of the 118m St Helen's building — which would become the tallest tower ever taken down in London. The scheme recently won formal consent, and work on the demolition should begin in about a year, when leases in the current building expire.
6-8 Bishopsgate (203 metres)
Work has already begun on this peculiar, teetering pile of boxes. The office-led development stands on the corner of Bishopsgate and Leadenhall Street, and is designed by Wilkinson Eyre. It should be complete in late 2022. A public viewing gallery will crown the building. The development also includes a new building at 150 Leadenhall Street, and will stand opposite another new 'scraper at 1 Leadenhall Street.
100 Leadenhall Street (249m)
Perhaps the funkiest design in our roll call, 100 Leadenhall Street is yet another sloping tower beside the Cheesegrater and Scalpel. Designed by Skidmore, Owings and Merrill, construction is expected to be complete by 2026.
Bankside Yards (163m)
The recently completed One Blackfriars (AKA 'The Boomerang') is about to get some company. Work has begun on a set of residential towers at the southern end of Blackfriars Bridge, designed by PLP Architecture. The mixed use development is to be known as Bankside Yards (names for the individual towers have yet to be confirmed). The cluster will perch over a series of yards and public spaces, with retail and cafes in reclaimed rail arches.
18 Blackfriars (136 metres)
Close by, and still taller, would be 18 Blackfriars, another tower by Wilkinson Eyre architects. This residential scheme has something of the Jenga about it. The scheme includes a smaller office tower (the second tallest structure in the image above), as well as further blocks for 'affordable' housing and leisure/retail. A new public square is also part of the plans, which are revised from a previous submission.
This article considers only towers in central London and is not comprehensive. Other large buildings are planned or under construction in Croydon, Canary Wharf, Wood Wharf, Vauxhall/Nine Elms and Old Kent Road, to name a few.